Located in the middle of Silicon Valley, Sunnyvale is the seventh most populous city in the San Francisco Bay Area and one of the major cities comprising Silicon Valley. It is the headquarters location of many technology companies and is a major operating center for many more. It is also home to several aerospace/defense companies.

In the 2010s, Sunnyvale became home to operations from numerous major technology companies, including Apple, LinkedIn (now headquartered in Sunnyvale), Google, and Walmart Labs. Google in particular has announced major development plans in the Moffett Park area, adjacent to Moffett Field. The city has consistently ranked as one of the safest ten cities in the United States. The southern half of Sunnyvale is predominantly residential, while most of the portion of Sunnyvale north of Highway 237 is zoned for industrial use. Within this southern half are several neighborhoods that account for a large number of Eichler homes throughout residential Sunnyvale. More specifically, there are 16 housing tracts containing over 1100 Eichler homes. For elementary and middle schools, most of the city is in the Sunnyvale School District, while some parts are in the Cupertino Union School District and the Santa Clara Unified School District. For high schools, most of the city is in the Fremont Union High School District, and those areas of Sunnyvale are divided between Fremont High School and Homestead High School. Some parts of the city are in the Santa Clara Unified School District. 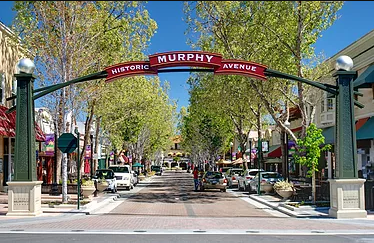